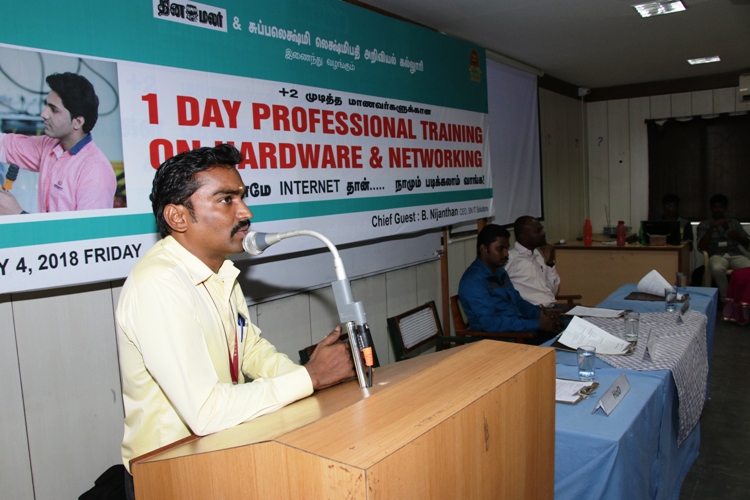 On 04th May 2018, Department of Networking organized 1 day “Professional Training onHardware and Networking” for +2 students. 20 Students from various places like Madurai, Theni, Sivagangai were participated. The session was started with the prayer song.Mr.M.Athigopal, HoD, Dept of Networking gave an introduction about the workshop.
Mr.S.Satheesh Kumar, Business Head,Winways Infomatics Pvt Ltd, Madurai, explained about the Career & Job Opportunities in Networking. His brief explanation made everyone to understand about networking industries and cleared their queries.Mr.B.Nijanthan, CEO, SN IT Solutions, Madurai, has explained the troubleshooting laptop,
and gave live demonstration to assemble, disassemble and troubleshooting of Laptops. The students were divided into teams each team work on laptops, they practice to troubleshoot it. The students were trained with PC Hardware Devices & PC Assembling.The students learnt Assembling & De- Assembling of PC practically & they also participated in the Contest. Finally Our Principal Dr.P.Saravanan thanked all the parents,students and faculty members and Certificate with Best performance awards were distributed to all the participants.Vote of thanks given by B.Lakshmipriya II B.Sc Networking.