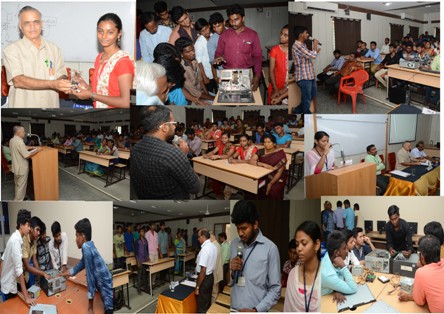 The Day1 session was started with the prayer song and welcome address given by Ms.M.Janani, II BSC Networking. Our Principal, Dr.R.L.Ramnath Inaugurated the Professional Training Programme with his wonderful speech. Mr.K.Archunan,Vice-Principal given speech about scope of Networking job opportunities. Mr.M.Athigopal, HoD (i/c), Department of Networking gave an introduction about the Programme.

On the first day morning and afternoon session the students of II and III B.Sc Networking were taught with the following concepts, “Introduction to the networking “was handled by M.Kirubaharan, B.Vinoth. “Basics of Network Devices” was handled by M.N.Arunkumar, E.Arunachalam and K.Sarumathi presented a video about “PC Assembling and De-Assembling”. The students were trained with PC Hardware Devices & PC Assembling. The students learnt Assembling & De- Assembling of PC practically & they also participated in the Contest.

On the second day morning Interactive session was handled by Mr. M. Avinash Kannan, Analyst, HCl, Chennai, explained about the Career & Job Opportunities in Networking. The trainer cleared the doubts of their queries. The afternoon session take over by Mr.Nijanthan, CEO, SN IT Solutions, Madurai, demonstrate and explained the working principles of Laptop with Live Laptop troubleshooting demo session for the students.