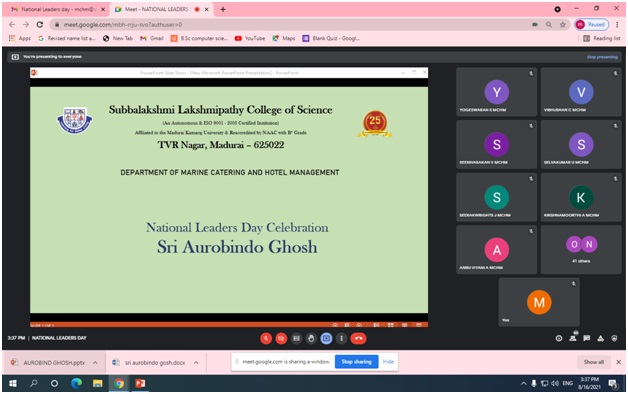 The Department of Marine Catering and Hotel Management organized and celebrated the birthday of one of the greatest national leaders, Sri.Aurobindo Ghosh on 16.8.21.    Mr. V.Gangadharan, Asst. Professor, gave the welcome speech. Mr.C.Sureshkumar, Head of the Department addressed the students and spoke about the great political leaders who ruled the country effectively and also protected our nation. The Department students gave a video presentation about the leader and they said that Sri.AurobindoGhosh was an Indian Philosopher, Yogi, Maharishi, Poet, and Indian Nationalist. He was also a journalist and edited newspapers like Bande Mataram. He joined the Indian national movement for independence from the British colonial rule and then became a spiritual reformer, introducing his vision on human progress and spiritual evolution. Mr. R.Ganesh, Asst.Professor delivered the Vote of Thanks.