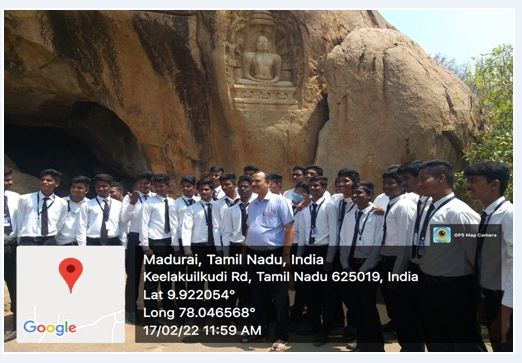 On 17.2.22, the Department of Marine Catering and Hotel Management went  on a field trip to Keelakuyilkudi,Samanar Malai, with the Second year students (28 students). There the students had the hands on experience of learning historical facts with fun and enjoyed in this field trip.    Samanar hills, Keelakuyilkudi village which is around 12 km away from Madurai, is a beautiful blend of nature with historical importance. Declared as a protected monument by the Archaeological Survey of India, this hill is an interesting site to visit presenting a glimpse of historical importance of southern India. These hills are associated with the  Jainism having Tamil-Brahmi inscriptions depicting various facets of this religion. Also known as Samanar Malai as the Tamil word Malai means hills, it boasts of ancient caves with carvings dating back to 1st century A.D. Samanar hill has many prominent sculpture and ancient inscriptions giving an insight into the history and into the Jainism religion which flourished here during the ancient times. The inscriptions on the hills are said to be more than 200 years old. These caves were the homes of many Jain monks during  the ancient era.