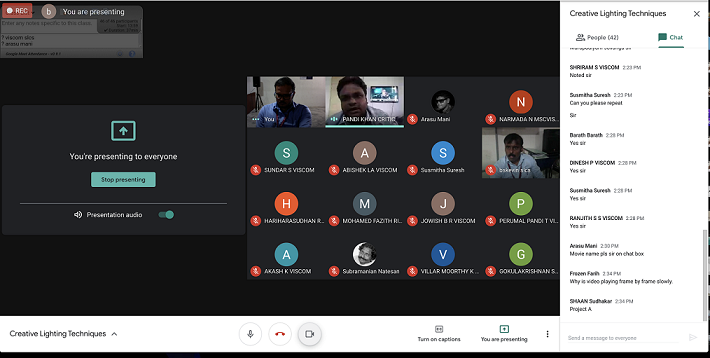 The Department of Visual Communication conducted a webinar on Creative Lighting Techniques for our Students on 18.09.2020. The inaugural session started at 02.00 pm. Mr. Babu Shajan Kevin, Assistant Professor, gave a brief introduction about the college and the department. Mr. J. Pandiaraj, Assistant Cinematographer, Chennai was the guest of honor. He has worked with Mr. Rajiv Menon, renowned cinematographer, for various advertisements as lighting supervisor and camera operator. Mr. Sivarajan, Assistant Professor delivered the key note address.

During the session the guest presented on various types of lights used in films and he also demonstrated by playing the subsequent clip. The students were asked to identify where the lights were placed. They actively responded. He covered seven major areas of lighting used in films. He used references from classical movies to commercial films. He also shared his experience working as a lighting supervisor with various leading cinematographers in the film industry. The session went on well with a total number of 42 students participating actively. He gave the students exercises relating to lighting. Later, the students asked their queries. He responded to each and every students query and also provided career guidance. Students enjoyed the session very much and thanked the management for providing such a wonderful opportunity and expecting more such events in near future.   Mr. C. Rajavardhan, Instructor proposed the vote of thanks. The event was a grand success.