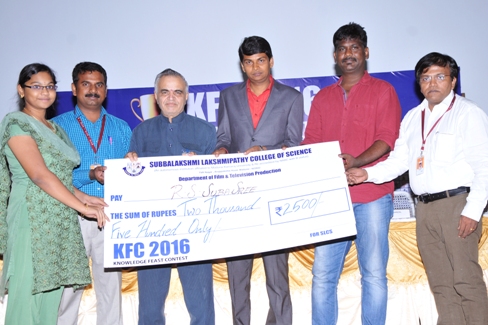 The much awaited Knowledge Feast Contest (KFC) became a reality after about two years on 08th March, 2016. Final year graduate students from about eighteen colleges partook with no. of participants crossing the 220 mark.

The preliminary round was conducted as a written one for 78 teams for short-listing them for the final round. The whole gathering assembled in our Air conditioned auditorium later. The event started with prayer song.  The participants had a feast for their ears in the form of speeches on felicitation / introduction to MBA course, facilities in our college for the course etc., presented respectively by the Director, RLIMS Mr.S.Rajasekar and Dr.S.Pugalanthi, Deputy Director, RLIMS.

Twelve teams, each having two members entered the final round of Quiz. After four rounds, the no. of teams was pruned to ten for a rapid fire round of thirty seconds each, within which five questions had to be answered. The Quiz masters were Shri J.S.Vivek Raja and Ms.A.Nithya, both students of I MBA at RLIMS (RL Institute of Management Studies). Every moment was made lively by the participants as well as the presenters.

In the post lunch session, the prize winners were finalized. The First prize went to Mannar Tirumalai Naicker College. The second prize was won by American College, Madurai. Lady Doak College, Madurai took the third prize. The prizes for the first three teams and consolation prizes for the seven teams (out of the ten stated supra) were given away by Dr.G.Balakrishnan, Adviser to M/s Subbalakshmi Lakshmipathy Foundation, Dr.S.Rajasekar, Director RLIMS and Dr.R.L.Ramnath, Principal, SLCS. Participation certificates were distributed to all the teams from all the colleges.

Ms.M.A.Surya, I MBA student of RLIMS proposed a vote of thanks. The day’s programme came to a close after national anthem. The comperes were M.A.Surya and Ms.Atchaya, students of I MBA, under the guidance and direction of Mr.B.V.Eswaran, Associate Professor, RLIMS.

The second day was devoted to Seminar and Short Film contest. The programmes started with prayer song. FTVP student Ms.Subasree gave the welcome address to all, with student participants numbering 87. Principal, SLCS delivered the presidential address. Felicitation speech was by Dr.S.Rajasekar, Director, RLIMS.

Shri Ramesh Kumar’s brilliant speech gave a lot of insight into the means and methods of presentation of news citing various examples. Shri Vijayan’s  talk was on Tamil language and the importance of production of events. Both these key note addresses were received with rapt attention, signifying that the audience remained captivated. After this, seminar was conducted in one hall and film screening in the other.

After lunch, the students visited the studio of FTVP department. Final screening of films was followed by screening of films produced by our students. The valediction took place thereafter. Mr.R.Vijayan and Mr.Abhimanyu Saravanan, cinematographer reviewed the films. Prize distribution followed. Ms.Shanmugapriya, student, FTVP, proposed a vote of thanks. Singing of national anthem marked the end of the day’s proceedings.

The second day’s compering was done by Ms.M.A Surya, I MBA student, guided and directed by Mr.B.V.Eswaran, Associate Professor, RLIMS guiding her.