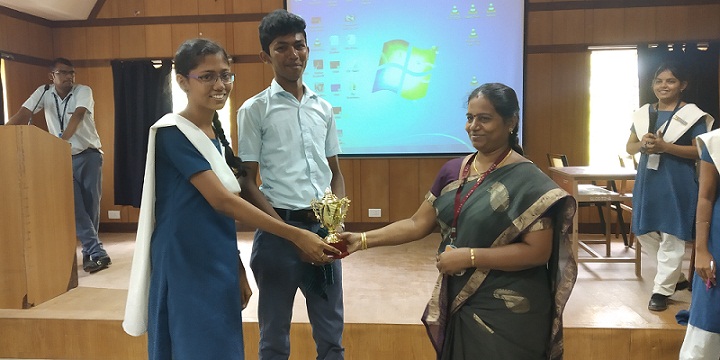 The KalaiSaral program was held on 23, August 2019 by the Association Members of Department of Computer Science. Since 2017, KalaiSaral non-technical program, conducted by the Department of Computer Science. It gained a great comeback this year after a quite long time. This program started with Prayer Song at 11.00am and followed by welcome speech, delivered by Mr. J. Karthick Prabhakaran of II CS.

Ms. V. Uma of II CS and Mr. C. Perumal of II CS did the compering on this occasion. Our Principal Dr. B. Ramamoorthy, Advisor Dr. R. L. Ramnath, and Dean Dr. S. Priya delivered the Felicitation Address. They also gave the motivational speech and encouraged the students to participate in these kinds of program regularly and the HOD of CS, Mrs. N. Anuradha, inculcated the way of overcoming difficulties in the life of the students.

A new initiative of the concept ‘Rolling Trophy’ was taken by the association members of this year. The Department of CS will be divided into 5 teams: I year-A, II year-B, II year-A, II year-B and III year. The Rolling Trophy will be awarded to the team which scores a high cumulative point in each such KalaiSaral program. And the same will be given to next year’s winner team.

The non-technical events started with Word Play event conducted by Ms. M. S. Raagem of II CS for all the five teams. Then, Google Doodle Finding event was conducted by Mr. R. A. Sathish Babu of II CS. In the previous meet, the announcement for a contest of taking a snap of grown saplings was given in the fresher’s party for I year students. The winners of that contest, Ms. Swetha and Ms. Yogasri of I year B Section, were given prizes. The prize distribution for the winner of KalaiSaral events were given by Mrs. K. P. Maheswari to I year-B Section and distribution of certificates for the students who participated in the workshops were provided.

This session was closed at 1.00pm with a vote of thanks, delivered by Ms. R. K. Nagadivya of II CS. The Students exposed their talents through this program.