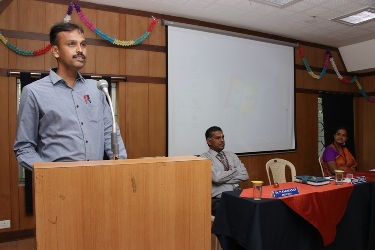 The Department of Computer Science (Security System Specialization) conducted a workshop on “Cyber Security and Ethical Hacking” for +2 students in the College premises on 12, May, 2018.

The program started with the Prayer Song. Prof.N.Anuradha, Head of the Department, welcomed the gathering. Dr.P.Saravanan, Principal, SLCS delivered the felicitation address.

The Chief Guest, Prof.S.Prasanna through his lively and interactive session created awareness on “Cyber Security and Ethical Hacking”.

Mr.T.Vigneshwaran & Mr.A.Gowtham Shankar, III B.Sc(CS) jointly delivered a Presentation on the Importance of Computer Learning and Cyber Security. They explained Ethical Hacking and Internet of Things (IOT) with real time examples. They also demonstrated about game development, which eagerly attracted all participants.

Through these demonstration and presentation the participants got an idea about Ethical Hacking and Cyber Security and even got trained to hack android phones and Facebook.

Mrs.K.P.Maheswari, Assistant Professor, Department of Computer Science explained the course and syllabus of the Computer Science (Security System Specialization) department. This session was an interactive session between the professor and parents who participated in the workshop.

The workshop came to the end with a feedback session, where two students among the participants shared their feedback and a parent came voluntarily to share his feedback about the workshop and the course “Ethical Hacking and Cyber Security”.

At the end of the workshop every participant was awarded a Certificate of Participation along with an admission application for the course B.Sc Computer Science (Security System Specialization).

Two studious participants were awarded with mementos by the III year students who were in turn motivated by the act of giving mementos.

The Vote of Thanks was delivered by Mrs.S.Nirmala Devi, Assistant professor, Department of Computer Science. The programme was successfully completed.